In the Ukrainian culture, a wedding celebration can last days (sometimes weeks!) as it includes lots of dancing, singing and feasts that typically include the entire community. The celebration is extremely rich in tradition and religion, as marriage is viewed as a partnership in Christ. There are also many aspects of a Ukrainian wedding that differ from North American weddings: 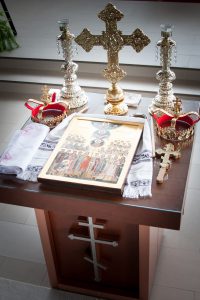 • The Blahoslovenya: Although in North American culture it’s believed to be bad luck for the groom to see the bride before the ceremony, Ukrainians don’t believe in superstitions. Before the ceremony, the bride, the groom and their respective families gather at the home of the bride’s parents. The parents of the couple state their official approval and it’s here where the families become one!

The design of St. Volodymyr Cultural Centre (SVCC) strongly reflects Ukrainian culture and traditions with the décor depicting various forms of Ukrainian art. If you’d like to host your wedding reception with us, contact us. We’d love to be a part of your special day!

Ring in the New Year with Pete Paquette at SVCC