Cultural Workers and Folk Artists Day is always celebrated on the third Sunday in May. The day was established to reignite traditional Ukrainian culture as well as folk art. It honours Ukraine’s rich cultural heritage and the people who have paved the way for its beautifully unique culture. The day is marked by numerous cultural events such as concerts, fairs and special exhibitions at museums dedicated to Ukrainian folk art. What’s especially different about Ukrainian folk art is that it has been influenced by both Western and Eastern cultural aspects. Lets explore some of what makes Ukrainian culture and folk art so special! 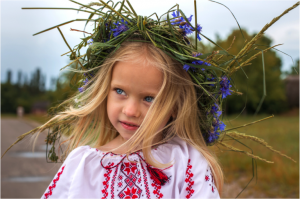 Often times in Ukrainian art, ordinary life events are transformed from regular to intricately beautiful. These intricacies are both symbolic and religious, as is seen in the traditional Easter pysanky and vytynanky.
Pysanky may be the most famous form of Ukrainian folk art. These colourful and ornate ‘Easter eggs’ are symbolically powerful and are said to possess the power to bestow wishes, good health and even prosperous harvests. The beautifully complex patterns drawn on the pysanky can represent everything from love and despair, to hope and mystery.
The areas of expertise in Ukrainian art boasts a bevy of internationally revered musicians, writers, poets, potters, dancers, singers, composers, sculptors, wood carvers, weavers, actors, singers and folk artists! When examining common themes, Ukrainian art is largely shaped by a relationship with the land and the nation’s complicated history. Common elements in traditional Ukrainian folk art often include the Tree of Life, the sun, and the goddess. It is no wonder that many of Ukraine’s most famous and beloved paintings depict the enchanting scenery and expansive countryside!
Perhaps a lesser-known form of Ukrainian folk art is the painting of religious or folk icons on wood or homemade canvas. This medium was generally practiced in rural areas by farmers or peasants and was incredibly important at events such as marriages, births and deaths. Though it largely died out many years ago, recent times have seen an uprising of galleries showcasing both old and new icons.

Embroidery
One thing Ukraine is especially renowned for is their delicate and intricate embroidery. It’s not surprising that Ukrainian artisan textiles play a large role in their culture. Ukrainian dress is typically classified into five regional groups: Dnieper River area, the Polisia region, Podilia, Galicia/Volhynia and the Carpathian Mountain region. The Polisia and Podilia in particular boast beautifully embroidered blouses. In modern times, there has been a stylization of traditional folk costumes, which has popularized the daily use of embroidered blouses. Though folk elements are often reserved for special occasions, like Cultural Workers and Folk Artists Day, some areas in the Carpathian Mountains still commonly wear similar garments. Aside from clothing, embroidery is commonly seen on pillows, table linens, basket coverings and religious iconography.

Dance has been an integral part of Ukrainian culture for centuries! The routines seen in Ukrainian dance are noted for their high energy and complicated, precise choreography. Dance was a way to combine poetry, music and celebration. Today, Ukrainian dance is a spellbinding display of both the history and culture of Ukraine. An interesting aspect of Ukrainian dance is that although it can be categorized by region, there are ‘story’ dances that are completely unique based on circumstance. The women wear brightly coloured costumes that traditionally consist of an apron, down to the knees featuring embroidery and special leather boots. The most striking aspect of traditional dance costumes are the flower headpieces with long, flowing ribbons. The men usually wear baggy pants, an embroidered blouse, and sometimes a colourful embroidered vest.

Popular instruments commonly used in Ukrainian folk music are the bandura, tsymbaly and trembita. Traditional ensembles consist of three musicians, and when performing dance melodies, usually include improvisation. Ukrainian folk music is considered more exotic than most traditional Western European music on account of the frequent usage of minor modes and keys. Being at the crossroads of Europe and Asia, these cultural elements are uniquely reflected in much of the folk music.

How did you celebrate Cultural Workers and Folk Artists Day this year? We’d love to hear! Share with us on our Facebook page.