Networking events can be incredibly intimidating. How do you break the ice? What do I say? What should I ask? We’ve compiled some handy tips to help make the process of networking and being a better conversationalist a little bit easier! 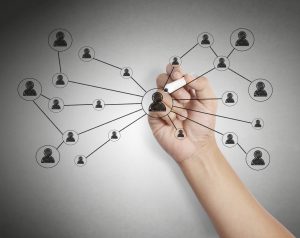 Chances are many of the people at this event are just as nervous as you are. Questioning if they’re dressed appropriately, if they should have eaten that everything bagel, and what they’re going to say to this room full of people. A surefire way to easily break the ice is simply giving a compliment. If you notice someone is wearing interesting earrings, perhaps a brooch or even nice shoes – let them know! Even if it’s a man, acknowledging a fun necktie or lovely leather shoes definitely will go a long way! Bonus: Nowadays most people spend most of their time on their phones, that’s another great thing to comment on. “Is that the new iPhone?” “How are you liking the Android?”

Sometimes simplicity is key. Imagine how you would react if someone approached you in the manner you’re thinking of taking. Stumped for the perfect line? Simply introduce yourself! Another great way to spark a conversation is to comment if they’re name is rather unique. Ask about its origin, whether they’re named after a relative – there may be a unique story that gets the conversation rolling!

An easy blanket statement is to simply ask if they’ve tried the food, do they like it, what are they drinking? “Cant decide whether I should try those crab cakes or not, have you tried them?” “I think I’m going to help myself to a drink, did you want anything?” This simple chatter can easily break the ice and may lead into more stimulating conversation.

Ask whom they work for or whether they come to events like this often. Even if you know the answer, it’s a foolproof way to get the ball rolling. Make sure to mention if you have contacts at their company or have heard of their work. People tend to enjoy talking about themselves and their interests. Since work is where we spend the majority of our time, the person is bound to chat about their work experience and company.

Weather is the ultimate go-to for small talk, and with good reason. As humans, we seem to be obsessed with the weather. “Ugh, SO hot today!” or “WAY too cold, where’s summer?” It seems as though some commentary on weather is always happening – even indoors. It’s humid, its dry, too hot, too cold, etc. A casual way to strike up a conversation is to mention the weather outside if it was particularly special (rainy, sunny, snowy – whatever!). Additionally, you can also comment on the inside temperature (“wow it’s boiling in here!”). Weather is a foolproof icebreaker for all occasions!

Sometimes the best conversations are not really talking at all.  Make a point to really listen to what the other person is saying, ask questions and show genuine interest in what they’re telling you. In order to keep the conversation going, keep asking curious and engaging questions to show you’re listening. Reiterating a bit of what the person has just said in your response or question will also ensure the person you’re conversing with knows you’re actually listened to what they’re saying.

As previously mentioned, people love to talk about themselves. Additionally, people also want to feel like their opinion matters. Ask them if they’ve attended this event before, or if they are familiar with the organizer. This way the person has a chance to share their experience or even lack thereof.

Networking chatter can often be so generic and boring. Though it’s not suggested you pick an argument and say anything that may be construed as offensive, it’s refreshing to have an actual discussion on what the conference is about, a mutual topic of interest or even the going-ons of your industry. Set yourself apart from the other basic networkers and stand out simply by being yourself!

Are you planning an upcoming corporate event? Try out some of our networking tips! If you’re looking for a venue, we’re here to help.

Ring in the New Year with Pete Paquette at SVCC